As you know, now PUBG Mobile season 17 is going on.PUBG Mobile Season 17 This season we have got to see all the Updates.

In this season we have got to see Runic Power Mode, but the next season is going to be interesting and better than this because in the next season 18 we will get New Maps and New Weapons. 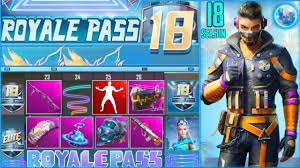 Right now this season 17 runic power mode is currently on inside PUBG Mobile. This hundred will remain for a few more weeks. after this, we will get the update of season 18.

We hope to get these updates at the end of March.

If you play Pubg Beta mode then you might have received this season 18 update. Along with this, you will also be using the features of PUBG Mobile Season 18.

If you are a fan of PUBG Mobile or playing this game for many days, then you will know that its update comes after every 8 weeks. All these updates come in Cyclic Manner.

Like every time, this time also hope that the season 18 update will come at the end of March

How to get Royal Pass in Season 18?

This stable version will be similar to season 18 in beta version 1.3. In this update, we will get to see the Karkin map which will be available for players.

This will be the sixth battle royale map which will come in season 18 after the Erangle, Miramar, Sanhok, Vikendi, and Livik. Kirakin map will be a 2 square kilometer classic map that will be filled with stones and Sands. This map only supports classic maps and it cannot be played in arcade mode.

Apart from this map, In this, we are going to get another type of grenade. Its name is Sticky Grenade. This grenade sticks to the wall and destroys the wall.