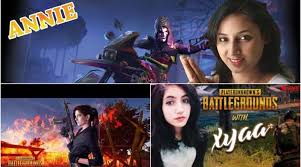 After the launch of Pubg Mobile, Many Females have shown interest in Pubg Mobile and emerged as Pro Pubg player, streamer, and YouTubers. Today Lots of Female or Girls are streams Gameplay and Upload Gameplay videos of Pubg Mobile on YouTube or other streaming platforms such as Twitch or Nono-live.

Today, I will share the 5 Most Popular Indian Female Gamers and Streamers in March 2021.


Bindass Kavya, One of the most popular Streamer, YouTuber, and Pro Pubg players from Aurangabad district in Maharashtra. Bindass Kavya has gained lots of popularity in the last few months. Her real name is Kavya Shree Yadav but Popularly known as Bindass Kavya due to her YouTube Channel Bindass Kavya and BindassKavya Gaming.

Bindass kavya regularly streams on YouTube. She mostly plays Pubg Mobile on PC. She has more than 800k+ subscribers on YouTube.

Pooja Khatri, an Indian Youtuber, Streamer, as well as and actress from Delhi, India. Her youtube channel name has the same name as her. She has a total of 657k+ subscribers on her YouTube Channel.

As I already told you, She is an actress and worked in lots of serials such as Ichhapyari Nagin (Sab TV), CID (Sony TV), Sankatmochan Mahabali Hanuman (Sony TV). Pooja started his YouTube channel in November 2018. She mostly streams gameplay of PUBG Mobile and COD: Warzone. She gets 50k-100k views per video.

Annie, an Indian pro Player, streamer, and YouTuber. She is from Kanpur, Uttar Pradesh. Her YouTube channel name is Rog Stream which was started by His Brother. Ayush Tiwari, Annie's brother, guided her in Streaming and manage her YouTube channel.

Today, Annie has 362k+ subscribers on her YouTube channel Rog Stream and gets 20k-30k views per video.

Shazia Ayub, a popular Pubg Player, streams under the name Mysterious YT on YouTube. She has 33k+ subscribers on Mysterious YT and gets 100k - 2M views per Video. One of the popular videos of Shazia has got 2.9 Million views on YouTube.

She is in the clan Intoxicated and mostly plays Pubg as a sniper.  In school time, Shazia plays Mario or Road Rash such types of games. Later he switched to Streamer from Interior Designer to become a full-time gamer.

Shagufta Iqbal, an Indian YouTuber and professional Pubg player from Bhubaneshwar, Odissa. Shagufta runs her YouTube channel by the name of Xyaa and currently has 258k+ subscribers. Shagufta started playing games at the age of 12. Nowadays, She enjoys and Streams games such as Pubg Mobile, COD: Warzones, and Apex Legends.

Initially, She has received backslash for many reasons, but she has reached here leaving everyone behind.

Today Female gamers are as popular as Male gamers in multiplayer royale games. The subscriber count of these gamers is nowhere nears the Male gamers subscribers counts. Becoming a female streamer, the gamer in India is not as easy as in other countries.

Being a female or girl gamer means inviting lots of difficulties. But these girls have reached here and told that the girl is not inferior to the boys in any case.