Genshin Impact is one of the popular games among the players specially in usa. today, we are going to talk abput the new character in genshin impact, Dainsleif also take a look on the profile of the dainsleif character. 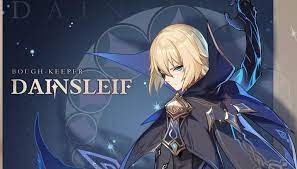 Amongst the many characters in Genshin Impact, Dainsleif is probably one of the most awaited and anticipated character. On September 27, 2020,It is annouced to as a playable character in genshin impact right before launch, but there is still no sign that he is anywhere near release.

In this article, we are going to showcase all Dainsleif leaks in Genshin Impact, including character profile, elements, weapons, and expected release date.

Dainsleif first appeared in genshin impact game during the World Quest "Bough Keeper: Dainsleif . Dainsleif has presented as a mysterious character who knows the Traveler and what they have accomplished so far.

During the Stormterror's Lair portion of the quest, Dainsleif has reveals that He is cursed with immortality and is much older than he looks. He is one of the few characters with a connection to Khaenri'ah in Genshin Impact. 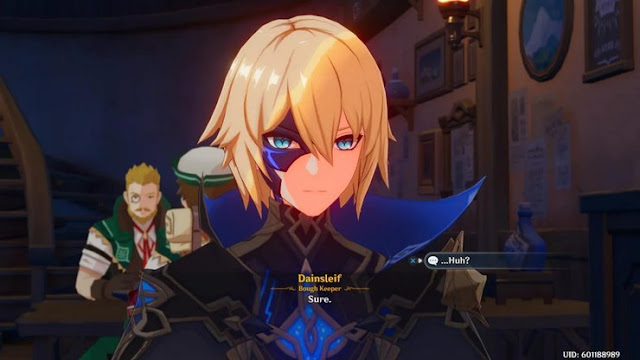 Apparently, Dainsleif failed to stop the catastrophic event that occurred in the country 500 years ago.

In appearance, Dainsleif Looks like is a tall man with light blonde hair and sea blue eyes, wearing a set of black attire with starry patterns. Parts of the right side of his body appear to be covered in a blue-veined pattern, which seems to expand when he uses his ability.

Dainsleif, like the traveler, seems to not have a vision attached to his outfit. This might be the sign that he is going to be a character with the ability to change elements similar to the Traveler. However, in the Chinese Character card, his element is listed in a mysterious language, unlike any other character in the game. 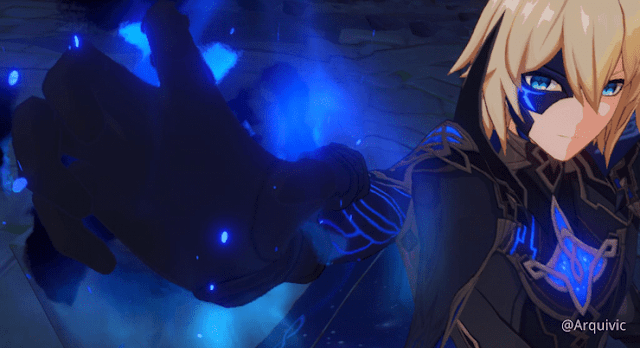 Based on his feats in the story, many fans suspect that he might have special Abyssal or Celestial elements. These both are likely obtained through his alchemy. In the quest, he used some dark power to choke the Abyss Herald... while in some of his official art, he has a glowing arm and gold eye. These details emit divine power similar to the aura of an Archon.

It is likely that these elements are going to arrive in the game later in the story, similar to how miHoYo added new elements to their other game Honkai Impact 3rd.

There hasn't been much more information available about Dainsleif's weapon so far. Based on the earlier leak in this year, he is going to join the list of Genshin Impact sword users. However, this is likely just a placeholder and can be changed at any time. 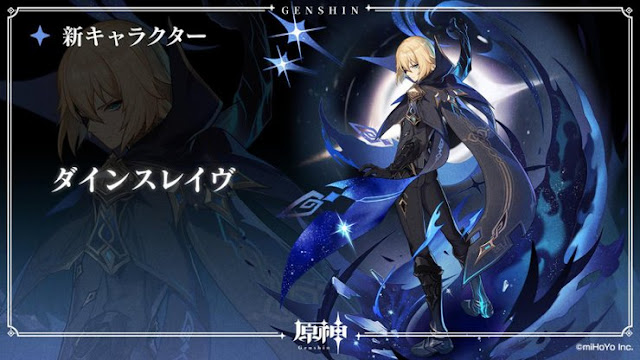 He is the featured character of a future chapter in the Teyvat Storyline, which focuses on the lost kingdom of Khaenri'ah. This will happen much later in the storyline of Genshin Impact. Based on leaks, Khaenri'ah is unlocked after the player explored all 7 nations of Teyvat.

So, in this article, I have shared all the available information about the Dainsleif Genshin Impact. Thank you for reading.
My name is rishab singh. I am student of B.sc Computer Science and love web development and programming.