Skylights Esports is a first BGMI eSport lineup to win the BGMI India series (BGIS). The owner of Skylightz Esports Gaming is Abhijit Nair. The Skylights Gaming won Rs. 50,00,000 in the BGIS Final. 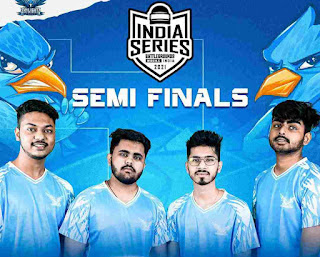 What is Skylights Esports BGMI Lineup ?

Skylights esports is a Indian Esport Organization, Its owner name is Andy Ng. Skylights Gaming is one of the Promising BGMI lineups in India. Skylights Gaming performance in the Recent pass is Very Good, the Continuously Come Top 5 in Every Tournament After the Launch Of BGMI.

Saumraj is IGL (in-game leader) Of Skylights Gaming, He previously played for Team Future Station. His team is one of the best teams in India because the team's synergy is very good. Saumraj is One of the Best BGMI Igl in India.

Skylightz performance has become the next level after Joining coach Ocean Sharma.

Saumraj Real Name Is Saumya Raj, He Is 19 Years Old Now. Soumraj is Igl of Skylights Gaming, He is a Very Good In Game Leader. Saumraj Zone Rotation and Calling Was On Point.

Pukar is an 18 Years Old Esports Player for Skylights Gaming. Pukar Play Assaulter and Scout Roll For his Team. He makes a place in the zone for his team and gives a call to the teammate, his Assaulting is also very good.

Gamlaboy Aka Tushar Das is a Professional Esports player For Skylight Gaming. He is 19 Years Old and Play Assaulter Roll For His Team. Gamla is always the top frogger in his team, he is almost on the list of top Fragger in every tournament.

Destro Aka Ammar Khan is the Assaulter of Skylights Gaming. He has Recently joined Skylights, Before that, He has played in other esport teams like Orange Rock, Umumba Esports and Xspark.

While Playing for Xspark, he has also become the winner of Pubg Mobile Club Open ( Fall Split).

Ronak Aka Harpreet Singh is 21 Years Old Esports Player For Skylights Gaming. Ronak Played Entry Fragger and Sniper Roll For His Team. Ronak Is Very Old Player, He has Played Pubg Since 2019 Pmis. He is also the Winner of Pubg Mobile India league For Playing Team Soul.

Also, Ronak is called One of The Best Snipers In India. Recent Time Ronak, not Much Active Is Esports, He is Play 5th player Roll For Skylights Gaming.

So, In this post, I had shared about the first BGIS Winner esport team who won Rs. 50,00,000. Skylights esports owner, Bgmi Lineup, net worth, and More. People call Skylightz esports by skylights gaming, Skylights Esports but the actual name is SkylightZ eSports.