Pubg Mobile vs Fortnite - 7 things to keep in mind

We know that both PUBG Mobile and Fortnite are among the most popular multiplayer games in the world. In this article, Keeping 7 things in mind, we will check these two games to see which game someone loses. 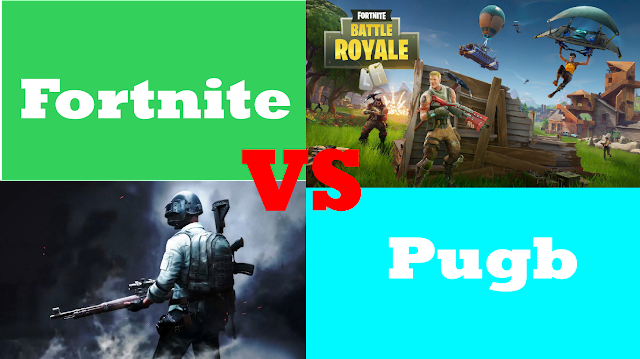 By the way, both PUBG Mobile and Fortnite are very popular games. But both of these games have their own specialties. We will talk about some factors such as graphics, gameplay, maps, weapons, availability, subtests, popularity.

Since there are many new and old battle royale games such as Apex Legend and Call of Duty: Warzone, But Pubg mobile and Fortnite still have many fans and both games have their own place in multiplayer royale games. If you are interested in Multiplayer royale games then Pubg and Fornite should be your first choice. Before going with any game you should read this article after that you can easily decide which games will be best for you.

The main thing about focusing on these games is, How they Look?

Graphic This is a basic factor of every game so that we can guess many things about that game. Each game has its own different graphics and design. The graphic describes the compatibility of the game. We all know that both games are far ahead in terms of graphics from other games.

Talk about PUBG Mobile and Fortnite, then PUBG is a mobile game that pays attention to realistic game design. PUBG GAME has greatly impressed people with its realistic maps, characters, weapons, and gameplay.

If we talk about Fortnite, The style of this game is completely different from PUBG Mobile. The Fortnite game has aims on bold, cartoony aesthetics game style. Its purpose is not to make things look real but to catch the eye. The characters of this game are all seen in this cartoon style.

Apart from all these things, both games Pubg and Fortnite also show how they were actually played. Pubg mobile game is more focused on the ground fight whereas and made the game realistic, making it easier for players to hide.

From the graphic point of view, both of them follow a very different game style, But If we talk about the gameplay, then both the games, PUBG and Fortnite follow the same basic structure. In both games, 100 players simultaneously land on the map and fight for survival. But when it comes to the gameplay experience, the two games look very different from each other. In both the games fight for survival in a shrinking Zone. This Zone simply called as Blue Zone in Pubg Mobile.

What makes Fortnite different from PUBG and other games is its building mechanics. Building the structure is part of the Fortnite game from the beginning to mastering this key feature of the Fortnite Game. In Fortnite, Players make the structure ranging from simple walls to Defensive Fortification.

Even apart from that, Both Pubg and Fortnite feel totally different to play. Whether Pubg and Fortnite similar in gameplay but is actually not similar too. Fortnite is a fast, arcade-game-like experience game whereas Pubg is a slow and more methodical game. The players have to plan before any decisions in-game. The pubg player should have to maintain patience in the game.

Although the structure of both the games is similar, their experience is quite different from each other. It is not enough to be an expert in the game, with just skills. If you don't learn the full map, you can't become an expert. Learning this terrain and using the features of every map is a very important part of the game.

If we talk about the Pubg mobile then, It has many maps and different styles. Maps in pubg mobile look more realistic compared to Fortnite. PUBG Mobile always updates the map from time to time. Whenever a new season starts in PUBG, some events are also seen along with the map. PUBG mobile's map is huge and comes with lots of opportunities.

The same Fortnite game offers you only one map. But they always keep getting updates on that map. Every season, we get to see some new updates, some features are added to the map as well, so some features are removed for instance. Changes occur on the map during every season and new features come and go.

In both the games, we get to see the Changes during every season. But if we talk about maps of Pubg Mobile vs Fortnite, then there is no credibility in this, we always get to see many types of maps and events in Pubg mobile, therefore We can see that PUBG is ahead of Fortnite in terms of maps.

Pubg whose focus is more on making things realistic, so the weapons found in Pubg mobiles are also very realistic and have more depth comparing to weapons found in Fortnite. Every Weapon has its own specialty in PUBG mobile and it also depends on the properties attached to it.

We can place different attachments in different weapons. If we talk about the popular gun in PUBG, then M416 and AKM stay on top. Apart from this, many powerful guns are found in it, such as Groza and M249 which is the drop gun and much Powerfull from other guns.

On the other hand, if they talk about Fortnite, they make their guns fun and easy to use. At high levels, using a gun is as difficult, but anyone can learn to use the beginner quickly if they give time to it. Apart From these basic weapons, Fortnite also provides much better and outstanding weapons when looking at Mythic weapons. These weapons function like magic weapons and are taking too much effort to handle properly.

Choosing between different guns made easy in Fortnite because of the color-coded loot system which makes it easy to decide which gun is best for players. If you want to choose the best gun in Pubg Mobile, then we have to compare stats of different guns and their damage and much more things. This makes pubg more complex and provides a more realistic experience.

Therefore both games have their own good and bad. So I have to save that both games equal to each other in terms of Weapons.

We know that both games work on a very live server, PUBG and Fortnite always have to bring updates to rely on a regular basis to keep the user engaged in the game. Since the launch of pubg mobile, they have followed the same period of time for updates. Pubg follows the same path for its updates since it was launched officially.

Every single season in PUBG is for 8 weeks, after that, they bring a new season update after a couple of days. Along with the updates of the season, they bring many more new things and features.Talking about every update, fixes bugs in it, increases user experience, and more.

Fortnite moves away from all the multiplayer royale games, they always take updates in the games. They constantly keep updating their map and getting updates for the changes in the games. If there is talk of constant change and new features in games, no game can ever come close to Fortnite. In these updates, new characters are also brought from different cultures, the franchise in fact superheroes.

Both the games keep constantly updating their games to improve gaming experience and user engagement with games by including new features day by day. when it comes to updates, no one can leave Fortnite behind. He always updated his only map and kept a lot of new features and keep fixing bugs. therefore the winner is Fortnite in terms of Update.

Both these games do not matter in popularity. But when we talk about multiplayer games then popularity matters. because every multiplayer battle royale game could function without a large user base. More Popularity means More User base.

When PUBG was launched, no one game could think of going around this game. The user base of this game was very high earlier one-two years. Gradually, players started showing interest in other royale games such as apex legend and by doing so, its popularity began to decrease. After the banning of pubg in India, it has lost a big user base from India. But even then this game still has a huge user base.

Fortnite continued to support her game and kept her users engrossed. Along with keeping its user base constant, it has also increased the user base. Now it is more popular than pubg in western countries. Keeping all these in mind, we can say that in terms of popularity, Fortnite has beaten Pubg Mobile.

Popularity one of the major factor by which Fortnite gained a big user base on board is just how easy it is to get into. Fortnite is free to play for anyone on all the platforms since the launch of Fortnite in July 2017. Once you are in, you can spend as long as you can want to play the full game without spending time.

Fortnite is widely available on almost every major platform. You can play it on Playstation 4, Xbox One, Nintendo Switch, PC, Mac, and Android Mobile. For now, Ios has been blocked from devices due to a bit of pull from the Apple company.

If you leave the mobile, then you have to pay to play pubg mobile on other platforms. PUBG was initially launched for PC, later it was launched for mobile. You did not have to pay much money yet, this created a barrier between the pubg mobile and the players. Because of this, more people have given Fortnite becomes the First Choice for players in multiplayer royale games in place of Pubg Mobile.

If you want more comparison between games. Leave a comment, please.
Thank You, So Much.