Android Gaming is getting better slowly. There has been a lot of improvement in the last few years in   Android Gaming Community. Where we started with Snake games and today we get to see PUBG, Asphalt, and some other great games on Android. Before we can only invite Facebook friends in-game, today we can play with many players from different countries.

Android is one of the most popular OS and today we have 50% of peoples uses Android all around the world. Today we will see the Top 10 best multiplayer games of 2021 for Android. Every game has its one specialty, feature, and Other kinds of Stuff. 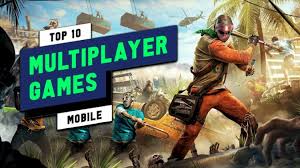 All the above games have been taken into account because every game listed above has a unique gaming experience. Some games provide the feeling of reality and some games are based on real-life movement. So let's see all of these games and their features.

In this game, 100 people land on an island together and fight with each other to keep themselves alive at that place. This game can be a great choice for those who like adventure games. This game is a cross-platform game, you can download this game from Google Play Store on Android and from Apple Store on iOS devices easily.

Fortnite is now the most popular Multiplayer game and Strong Competitor of Pubg Mobile. While PUBG Mobile takes care to make its game realistic, The The fortnite game always improves its game and performance. Fortnite features only one map, but Fortnite always updates that map and brings new opportunities for the players.

Fortnite plays similar to pubg but with builds mechanics as well. You can choose between both of these games, both games have decent multiplayer experience.

It is a Cross-platform MMO RPG game. AdventureQuest 3D is truly a massively multiplayer game. There are a ton of quests and adventures for you in this game.

This is the latest game from the Gameloft popular franchises. This game is also similar to the old version of Gameloft. Like all racing games, you also have to unlock cars and participate in motors races. In this game, you have to play in non-PvP mode. You can easily spend a lot of time in this game. In this game, you will get to see very good graphics. Although the graphics of this game is really good, many people do not like it due to its simple mechanics.

Call of Duty is a new game in Android Gaming, recently launched and surprisingly a very good game. There are a lot of modes to see in this game such as Call of Duty Death Match as well as 100 person battle royale mode like Pubg Mobile and Fortnite. This game features some of the unique features such as you can collect characters and customize, modify according to your need. Like most of the game, there are few bugs in every update but they are getting rid of them on the next update and you can enjoy this game very much.

Actually, Minecraft is free in reality. You have to pay $ 6.99 to get the character's skin. This game is really an interesting game from all the games listed here. You are dropped into a randomly generated world and you can do whatever you want. This game includes three modes that are creative, survival, realm. The creative mode can never let you die for any reason. In Survival mode, you can die because in this mode spawn Bad Guys and has Food System.

Pokémon Game It was a very popular game in the last few years. Even today its popularity has not decreased. I love this game.

Supercell has developed many popular multiplayer games in the last few years, among them Clash of Clans, Brawl Star both and Boom Beach are very popular games. All these games are strategy-based and have simple mechanics. Even though it is very simple but peoples are playing this game for a long time.

Clash Royale is one of the games from supercell, is a card dueling game similar to hearthstone. Their latest game brawl star has very decent graphics, simple mechanics. It is a mix of MOBA and Multiplayer games where players can chat with each other. There are no perfect games, tough, but there provide a decent gaming experience as long as you don't mind.

Runescopy is a really awesome and older game in this list. This is an MMORPG game and rarity in Android space. Out of the rest of the game, it does not drive Freemium Element to make money,  In its place it charges monthly or annually fee. However, this is a very good game and the popularity is also high, due to being a paid tree, players are not able to play this game. Even then its user base is very large and its developers are also responsive.

The game is cross-platform and play on many devices with your friend. The game has very small learning curve. You learn it a little bit and you will be ready rock in this game.

You learn it a little bit and you will be ready to make this game.

Thank You guys,
Comment which game do you love ?